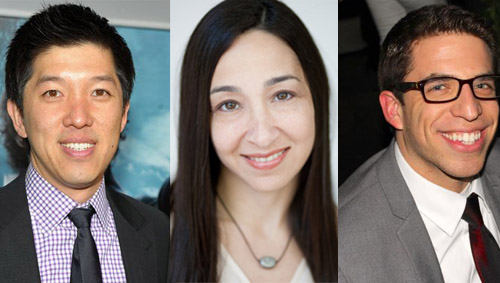 Over the years it’s great to see Penn alumni working together in Entertainment.  One very Penncentric and prominent company has recently come to our attention.

Lin Pictures was started by Penn alum Dan Lin (W’94) and has a first-look deal with Warner Bros. in both film and television. The small production company has started to pack a powerful punch with hits such as The Lego Movie (starring Penn alum Elizabeth Banks).

Jennifer Gwartz (C’90) was the first Penn hire on the docket. Gwartz is a major player in the industry, having developed such hits as Scream, The Matrix, and “Veronica Mars”. Lin has since tapped her to act as Head of Television and Chief Operating Officer. Female power!

The company’s most recent hire is Jason Ellis (C’09), who has come to assist Gwartz after a long stint at CAA. With his history at the agency powerhouse, he probably has the best phone manners you’ve ever heard.

One of the company’s current TV projects is ABC pilot “Forever“, starring Fantastic Four’s Ioan Gruffudd. The pilot centers on a medical examiner in New York City who is obsessed with death because he is secretly immortal. If only we all could be so lucky, living forever and stuff. Look for it in the upcoming pilot season!

Does this all sound awesome to you? You’re in luck. Lin Pictures is actually looking for summer interns. Check out the info here!

One thought on “3 Penn Alumni In One Powerful Production Company (& they’re looking for interns!)”