There is no question that Penn alumni are working together all over the entertainment business (and there have been plenty of DT stories about this).

Here’s another goodie sent to me by USA network executive Michael Sluchan (C’93). Not only did Michael Sluchan help develop and now oversees “Royal Pains”, but he also works on the show with another Penn alum, executive producer Michael Rauch (C’90).

And on tonight’s season finale, a third Penn alum you all know joins them.

After the jump, more about who, his featured song on the show …and about executive producer Michael Rauch’s writing path from Penn and beyond. 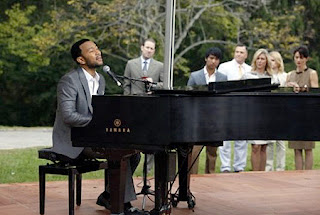 Six time Grammy winner and Penn alum John Legend (C’99, Counterparts) will be featured on tonight’s “Royal Pains” season finale entitled “Listen to the Music”.  On the episode, John will be performing at an MS fundraiser, where he will be performing his single ““Shine”“.

What was Michael Rauch’s path to becoming a writer?

I chatted with executive producer Michael Rauch and he told me while he was at Penn he “majored in english, minored in history, adapted a Dashiell Hammett book into a screenplay, didn’t drink enough, and played lightweight football.” After Penn, he went to film school at Columbia University for his masters, wrote and directed a feature film, directed and produced a filmed adaptation of an Eric Bogosian show, created three TV shows (“Love Monkey” for CBS, “Life is Wild” for CW, and “Beautiful People” for ABC family), and has now been running “Royal Pains

Watch Michael Rauch talk about developing characters on the show below (click on “Developing Characters” in the right nav):

Listen to a sample of John Legend’s “Shine”