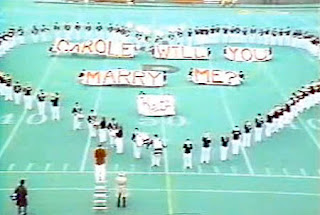 Some of my favorite stories on DT have to do with Penn love.

I’ve covered Penn alumni getting married on campus and have even covered some great Penn proposals.

Well, I just discovered another Penn proposal from 1986 that was accomplished during the halftime show on Franklin Field with the help of the Penn Band.

After the jump, check out the video from the Penn vs. Lafayette football game and be sure to also get a blast from the past with these highlights: