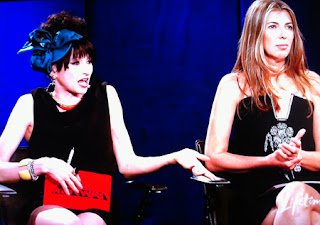 Over the past couple of years on “Project Runway”, we’ve seen this mega fashionista guest judge and this Penn alum appear as a contestant.

Last night a 3rd Penn alum appeared on the show and guest judged alongside Heidi Klum, Nina Garcia and Michael Kors. And we learned she’s “not a fan of voluminous wee wee pads” and she “loves sparkle”.

After the jump, learn more about Stacey Bendet (C’99) and her story from her fashion beginnings at Penn to becoming a web designer to running a 50 million dollar company!

After digging a little, turns out that the very stylish entrepreneur Stacey founded successful clothing companies including Alice and Olivia and Anthony and Mo.

Per her site, “While studying at the University of Pennsylvania, she garnered herself quite a collection of denim. To quote Stacey, “stacks and stacks of it.”… after years of vingtate shopping, tweaking, tailoring, snipping and sewing, seh set out to make her own pants. Something unique… Alice + Olivia launched in 2002 at Barneys NY and was an instant success….In 2004, Stacey made the leap into menswear when she developed Anthony+Mo, a brilliantly colored men’s cashmere sweater collection, which she named after her two best college pals.”

Learn about her beginnings in this 2009 video below:

There certainly are tons of DT stories about Penn alumni from the class of 1999!

Read more about Stacey in this Elle article HERE