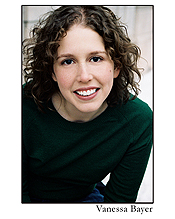 It has just been announced that Penn Alum Vanessa Bayer (C’04, Bloomers) is one of three new cast members of the upcoming 36th season of Saturday Night Live! (source)

Like many SNL castmates, Vanessa comes from doing Chicago’s Second City.  Per her bio on the Second City website,

“The Cleveland native was director of Bloomers sketch group at the University of Pennsylvania and has interned at Late Night With Conan O’Brien and Sesame Street. Vanessa now performs in Chicago with iO Theater’s Revolver, the puppet show FELT, Annoyance’s Splatter Theater and Lil Talent Show and does stand-up at Zanies. Many thanks to her sassy family and friends for teaching her that laughter truly is the best medicine.”

By the looks of her Blue Shield of California parody commercial above, Vanessa will have no problem fitting into SNL and giving Kristin Wiig a run for her money! Good luck Vanessa! (thanks to Abby Barba (C’03) for the tip!)

Congrats to the Bloomers, but let’s not forget some notable Mask and Wig alumni in some classic film and TV HERE