Check out this exclusive from Penn Producer’s new zombie film!

If you think you’ve seen all the Zombie film and TV premises, think again!

After the jump, check out the exclusive photo Todd supplied us with from the film, learn more about the film’s unique premise …and find out the big project Todd’s about to start in a few weeks! 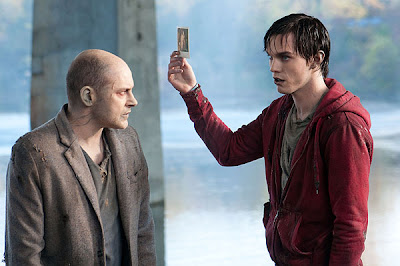 In the image above,  (l to r) “M” (Rob Corddry) and “R” (Nicholas Hoult) are highly unusual zombies who are becoming increasingly more human in Warm Bodies. (By the way, if you’re a fan of the TV show “Children’s Hospital”, you may not recognize Rob Corddry without his clown makeup)

Here’s the shpiel about the film:

After a zombie epidemic, R (a highly unusual zombie) encounters Julie (a human survivor), and rescues her from a zombie attack. Julie sees that R is different from the other zombies, and as the two form a special relationship in their struggle for survival, R becomes increasingly more human ­setting off an exciting, romantic, and often comical chain of events that begins to transform the other zombies and maybe even the whole lifeless world.

Todd tells me they shot the film in Montreal and a big chunk of the movie in an abandoned airport there:  “I love the way the movie turned out.  It’s very unique and blends many genres together.”

In a few weeks, Todd is about to start shooting Muppets 2 in London!  (remember when Todd’s muppet got cut from his last muppet movie?)