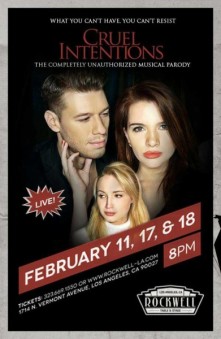 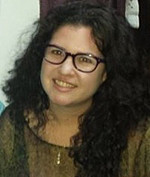 Lindsey is directing this staged, musical version over the next 2 weeks. It’s a concept presentation, so they only have three performance dates, but hope to extend the run this spring and summer.

Check out the shpiel below and a great 15 second clip(!) Lindsey sent us that will give us a flavor of the major talent in this show!  Congrats Lindsey!

“A Concept Presentation of The Unauthorized Musical Parody of Cruel Intentions:

Roger Kumble’s relentless game of cat and mouse comes to life at the Rockwell Table & Stage in CRUEL INTENTIONS: THE COMPLETELY UNAUTHORIZED MUSICAL. This cult classic tale of seduction and revenge follows despicable step-siblings Sebastian (Broadway’s Constantine Rousouli) and Kathryn (“Faking It”’s Katie Stevens) in their attempt to destroy their classmates (Molly McCook and Pitch Perfect’s Shelley Regner.) Featuring music from Placebo, The Cardigans, The Verve, and more… you’ll laugh, you’ll cry, and when the stakes are this high, you might even fall in love. And, sometimes, that’s the cruelest thing of all. Also starring Garrett Clayton (Disney Channel’s Teen Beach Movie) and Tyler Scheef. Music Direction by Laura Baum. Produced by Kate Pazakis and Stephanie Lazard. Adapted by Jordan Ross. Directed by Lindsey Rosin.” 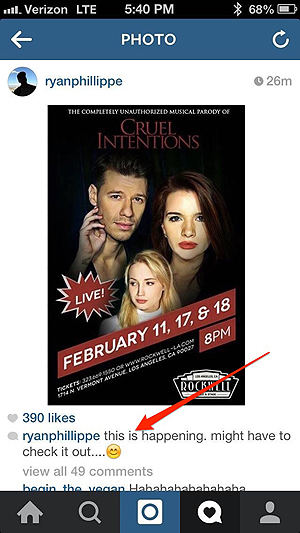