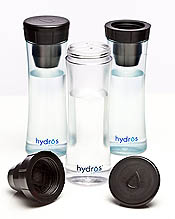 More and more entrepreneurs are coming out of Penn these days and their products are really stellar and green.

While Aakash and Jay were at Penn they developed a state of the art water bottle you’ll want to check out that is now hitting the market. After you read more, you’ll think twice before drinking out of a plastic water bottle again.

After the jump learn about their Hydros Bottle, how it was developed at Penn …and how you can win one next week in honor of Earth Day (4/22)!

Aakash and Jay’s Hydros Bottle provides American consumers with access to great tasting, refreshing water on the go through a novel, fast flow filter built into reusable filtered water bottles. Their bottles are made from Tritan™, the same material used in Nalgene bottles, and a sophisticated filter that quickly removes chlorine, chloramines, and particulates. With Hydros Bottle, consumers have an opportunity to fight the global water crisis and the spread of wasteful plastic water bottles.  Through Operation Hydros, their donation from each bottle provides 2000 gallons of fresh water through water projects in developing countries as well as hundreds in cash savings for former disposable water bottle drinkers.

How did Aakash and Jay start this endeavor?

“The concept for Hydros Bottle began at Penn in the spring of 2009. Both of us were working on separate versions with Innova Materials, another Penn start-up led by friends of ours, spun out of Penn in 2007.

Jay was president of Penn Engineers Without Borders and had seen the devastating effects of the water crisis first-hand during water infrastructure projects in Cameroon and Honduras. Inspired by his experiences, he worked with Innova to come up with an idea focused on increasing water access amongst the developing country’s rural poor and entered it into the Dell Social Innovation Competition. Concurrently through a Wharton course called Societal Wealth Venturing, I was looking at how profit-seeking entrepreneurship can be used as a model to provide urban consumers in developing nations with clean water on the go.

Once the idea was selected as a Semi Finalist in the Dell competition, we decided to join forces and work on a hybrid of the two concepts, Hydros Bottle.  We agreed to first focus on releasing the bottle in America as a substitute for disposable water bottles.  This experience would lay the foundation for developing the technologies and the brand awareness to enter the global market.”

As you can see, Hydros Bottle is a great way to go green.  In honor of Earth Day next Thursday (4/22), DT is having a contest where you can win one of these great Hydros Bottles!

The more creative the better!

Get the contest details here…+/-

For other Penn folks who want to donate a prize for a future DT contest, email me at