Home / From aspiring TV writer to “paid” TV writer: the steps this Penn alum is taking

From aspiring TV writer to “paid” TV writer: the steps this Penn alum is taking 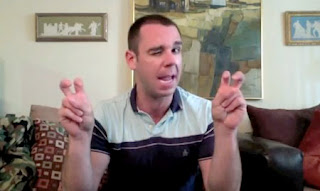 A couple of weeks ago we met aspiring LA TV writer Rob Forman (W’06) and he told us about his journey from Penn to LA, the agency he first worked at, and the TV shows on which he’s been a writer’s assistant.

In today’s installment, Rob talks to us about the steps he’s taking from being an aspiring TV writer to a “paid” writer. (Note the Rob’s masterful use of “air quotes” throughout the video : ) )

After the jump, listen to Rob talk about:

Also, be sure to check out the embedded spec scripts Rob has provided us to read and learn from!


In the video above, Rob mentions both the “Heroes” spec he wrote 3 years ago (he was a finalist in the Disney Fellowship) and the “Glee” spec he wrote this year. Read them and his commentary below! Thanks Rob for providing these!

FYI, in the video above, Rob references these writing competitions:

“I wrote this spec script after the series’ abridged (due to the WGA strike in late 2007) second season.  I’m a comic book nerd, so relished the opportunity to write for these characters and have fun with their abilities.

Heroes was a heavily serialized show (versus a show like CSI that starts each episode with a murder and solves it by the end) focused on building to cliffhangers.  Writers are often discouraged from writing specs of serial shows because they quickly become obsolete due to the constantly changing nature of serial storytelling—but I took this as an opportunity to really flex my creativity.  I had no idea what the show would do in its third season, so got to come up with my own backstory for what happened in the 18 months between the end of season two and this episode, which is the second in a fictional fourth season of the show.  I decided to do that, rather than make it the first episode, so that I could start with various plots already in motion and keep escalating them from there (building, in the tradition of the show, to cliffhangers rather than resolution).

Of course, the third season of the show aired and many things didn’t “track” with what I wrote (characters died, allegiances changed, etc)… but the spec served its purpose in helping me become a Finalist for the ABC•Disney Fellowship in 2008.”

“This episode is set in the third season of the show.  I started writing it when I went on hiatus for Army Wives and after the penultimate episode of Glee’s second season aired, with deadlines looming in just two weeks!  I couldn’t even wait for the finale to air if I hoped to get it done in time.  Glee is a serialized show, too, but it often has self-contained, thematic stories that apply to the ongoing, twisting personal relationships of the students in the club and the faculty at the school.

There are already things that don’t track with what the show will be in season three… for instance, I use Chord Overstreet’s character, Sam Evans, in a minor capacity and he is now—unexpectedly—off the show!

Since I submitted the script to various programs, but won’t hear back for a little while, I’m including the first act to give you a taste.  In a few months, I’ll publish the rest.

One of the issues with spec scripts can be “what if the person reading it doesn’t know the show?”  To counter that, I decided to piggyback on something the show occasionally uses: voiceover.  In the opening moments, Mercedes walks through the backstage of the auditorium thinking about her lack of a love life and fills the reader in on the love lives of the other members of the Glee club (while, in the action lines—the stage directions and description that is not dialogue—I give a little information on the kids’ personalities) in the hopes that someone who doesn’t watch the show can still follow along.  The show also employs a highly-stylized “previously on” section, so I also decided to start the script off with one to help set the stage.

A note about Glee scripts: the show itself does not write in the choreography or most the lyrics.  After all, they get to record the music and film the performances!  I just had the written word to work with, so needed to write lyrics (as well as some incredibly basic stage moves) out, both because I wanted to choose songs where the lyrics applied to the story (you’ll see that in both song selections in this act) and because I couldn’t assume a reader was familiar with any of the songs I chose.”

Plus the best paid internship in entertainment you don’t know about!

More of my Tuesday Tips HERE

One thought on “From aspiring TV writer to “paid” TV writer: the steps this Penn alum is taking”