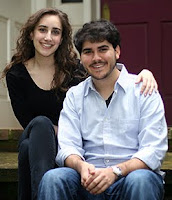 In continuing my “Penn Foodies” week, after yesterday’s story about this restaurant entrepreneur, today I bring you a post about yet another set of Penn alumni working together.

Great story here. Two friends (and now dating!) write blog at Penn, get approached by publisher and now have book!

Alanna Kaufman (C’08, DP, City News Editor, Kite and Key Tour Guide, Big Brothers Big Sisters Mentor) and Alex Small (C’08, DP Photo Editor) published a new book called The Frugal Foodie Cookbook: 200 Gourmet Recipes for Any Budget which features high-quality recipes at low costs, and is aimed at cooks at any skill level (or no skill level!).  The idea for the book stemmed from their food blog, Two Fat Als, which they began writing while at Penn.  Both the blog and the book include anecdotes about their experiences cooking at Penn and in Philadelphia.

How did they get started? 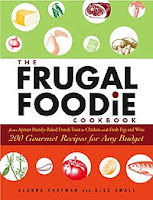 “After finishing our editorships at the Daily Pennsylvanian, Alex and I had a lot of free time on our hands, and we began cooking.  Though our kitchens were tiny and poorly equipped, we starting making dinner each night and recording our dishes on our blog, Two Fat Als.  The blog was designed to show other college students that it was possible to create tasty and sophisticated dishes on a low budget.  Alex has always been a great chef — his Colombian mother and Jewish father put him to work in the kitchen at an early age — so he taught me basics and we continued to develop our skills together.

Cooking for the blog moved us to explore different food markets in Philadelphia (the farmers markets, the Italian market, Redding Terminal), and we would often have friends over multiple nights per week for dinner.

After a literary agent found the blog online during our senior year and suggested that we write a book proposal, we found Adams Media and The Frugal Foodie Cookbook was born!”

Alanna and Alex’s favorite meals for friends at Penn which they served pre-Walnut Walk their senior year (from their book):
Apricot Brandy Baked French Toast +/-

Per Alana, “The day we first heard from our literary agent was the same day as our Walnut Walk during senior week. We were hosting a huge pre-walk brunch for our friends — we made the apricot brandy baked French toast from the book, as well as cinnamon buns and an asparagus frittata. That was one of our favorite meals for friends at Penn and everyone stuffed themselves in preparation for a long day.”

And one of Alanna’s favorite recipes (from their book):
Black Bean Soup +/-

…And this isn’t the first Penn alum who wrote a blog about saving money as a student at Penn and then got discovered.  Remember THIS Penn alum whose blog got turned into a book and then was hired to write on “Scrubs”?!

Get in touch with Alex and Alanna! twofatals at gmail.com

Other money saving tips from my “Pinching PENNies” series HERE