From Deloitte Consulting to Evita: This Penn alum’s career change 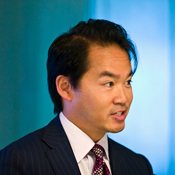 Over the past 4 years on DT, I’ve had many stories about Penn alumni changing careers from traditional jobs to entertainment related jobs.

After the jump, find out about how one Deloitte consultant Penn alum is now pursuing his passion… and a musical performance you won’t forget!

Meet Eric Mark, a 1994 graduate of The Lauder Institute, with an MBA in Strategic Management & Marketing from Wharton and an MA in International Studies (with a concentration in Western Europe and French).

For the past few years, Eric was the lead Media and Entertainment Strategy partner for Deloitte Consulting and he recently left to pursue more creative activities, including voice over, acting, writing, and stand up.

I thought his journey is an interesting one for any Penn folks also interested in making a career change or for those who are first embarking on this sort of career….

In the humorous clip above, you’ll see Eric took “Singing for Actors” with a great vocal coach here in LA named David Coury. (I can vouch for David, because I actually took lessons for fun with him too some years ago.) After his song, listen to Eric’s monologue (and true story) of his trip to Europe and the very friendly Canadian who hosted him in London.

Incidentally for those Los Angelinos interested in doing this themselves, Eric’s next free “Singing for Actors 2.2” show is this Saturday March 19 at 2:00pm at the Howard Fine Acting Studio at 1445 North Las Palmas Avenue in Hollywood, and that all are welcome to attend.

As Eric makes this transition from consultant, in addition to the “singing for actors” workshop mentioned above, he has completed the following:

1) Has already created a commercial voiceover demo (listen below):

2) Has taken several classes at Kalmenson & Kalmenson, which is one of the better known voice-over schools in L.A., as well as a casting agency.

3) Has graduated from the Second City Conservatory and writing programs.

So what’s next for Eric in the coming months as he makes this career change?

Stay tuned as we’ll be checking back with Eric as he goes on this journey!