From her tongue kissing boyfriend to her idiot brother: Liz Banks’ new roles 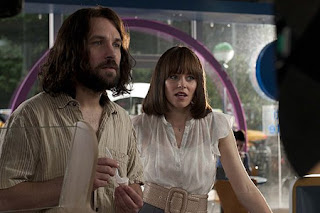 Over the past few weeks, a couple of Liz Banks (C’96) related news items have come out.

After the jump, check out the trailer to her new film and find out which coveted book series role she has confirmed taking on!

1) The trailer for Liz’s new movie, Our Idiot Brother just came out.  Paul Rudd seems pretty funny in it.

And this isn’t the first time she’s played opposite Paul Rudd.  Who could forget when she played his lip locking lover in Wet Hot American Summer

2) Another piece of big news: Liz will be playing Effie Trinket in the hot trilogy series, The Hunger Games

. In it she will be playing the escort and protector of the film’s main characters Katniss Everdeen (Jennifer Lawrence) and Peeta Mellark (Josh Hutcherson). Expect to see Liz donning different hair colors.

The plot of the film seems great:

“In the ruins of what was once North America, twelve remaining districts are forced by the

Capitol to send one boy and one girl between the ages of twelve and eighteen to participate in the annual Hunger Games, televised for all to see.16-year-old Katniss Everdeen (Lawrence) becomes a contender in the Games in order to save her little sister from having to compete. Only one of the 24 contenders can survive. To win the Games and return home, Katniss must make choices that weigh survival against humanity and life against love. Based on the novel by Suzanne Collins.” (source)

By the way, Liz is teaming up with director Gary Ross from when she did THIS

The Hunger Games series actually reminds me of this great Japanese film.