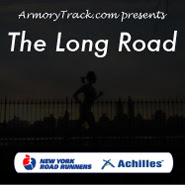 Just last week, Glenn Osten Anderson (C’02) flew to LA to attend Pennfest 2007 where we showed a clip from his film Mission: SEC Football.(it just won two ACCOLADE TELEVISION awards one for Best Internet TV and one for Videography)

Apparently, Glenn has a thing for sports related films.

His latest project, The Long Run is an “intimate and powerful” documentary about two disabled student-athletes preparing for the ING New York City Marathon.

From the film’s press release, “The Long Road not only builds on our mission to promote exercise and athletics, but gives us the opportunity to profile a unique side of the student athlete community” said Armory Foundation President and New York City Marathon winner Norbert Sander, MD. “ Never before has a documentary been able to go this deep inside the marathon. The unprecedented access afforded to this production by New York Road Runners and The Achilles Track Club helps to craft these powerful and important stories.”

Click to see what other 2002 Penn grads are up to