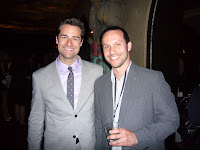 This past Monday, I attended the Hollywood premiere of Producer and good friend Todd Lieberman’s (C’95, Mask and Wig, AEPi) film The Proposal at Hollywood’s El Capitan Theater.  (Photo to right (l to r): Todd and I)

Before I get to the actual Hollywood “scene” of this premiere, I have to say that I really enjoyed this movie and it feels good to know that a guy I call one of my best friends is glowing at the response of having a hit movie on his hands.  The casting was right on the money with Sandra Bullock, Ryan Reynolds, and Betty White (plus a great scene stealer from “The Office”‘s Oscar Nunez). Not only were there many funny scenes due to the pleasantly awkward tension between Bullock’s and Reynolds’ characters, but there was some great heart to the film as well. Definitely a great date movie.

Here’s a good summary summary of the movie (per Yahoo Movies):

“When high-powered book editor Margaret faces deportation to her native Canada, the quick-thinking exec declares that she’s actually engaged to her unsuspecting put-upon assistant Andrew, who she’s tormented for years. He agrees to participate in the charade, but with a few conditions of his own. The unlikely couple heads to Alaska to meet his quirky family and the always-in-control city girl finds herself in one comedic fish-out-of-water situation after another. With an impromptu wedding in the works and an immigration official on their tails, Margaret and Andrew reluctantly vow to stick to the plan despite the precarious consequences.”

Now onto the afterparty…

And then I saw a bunch of celebs, but decided to approach only two.  And before I tell you what I said, I fully acknowledge the awkwardness in my attempt at conversation with some of these celebrities, yet in the following 2 cases, I felt the need to approach them: 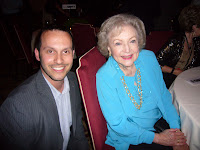 The Proposal hits theaters on June 19.