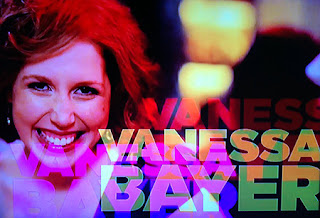 If you missed SNL on Saturday night you missed seeing Penn alum Vanessa Bayer’s (C’04, Bloomers) enthusiastic energy and smile planted in a good number of sketches. In fact, her face was the first to open the show in a sketch where she played a secretary announcing Christine O’Donnell’s arrival at the Republican National Committee Headquarters.

Having been a fan of SNL now for almost 25 years, it is clear to me that Vanessa’s got “it”.  As I watched her through the show, it became clear to me that she reminded me of a young Cheri Oteri…. super committed to her characters with that great smile!  …I realized this during the sketch when she played a woman lunching commenting on how fantastic her friend’s “tiny hat” was.

After the jump check out the “Wedding Venue: it could happen” and “Tiny Hat” sketches she appeared in and screengrabs from all her appearances throughout the show (including the magical look from Vanessa in the show’s final “goodbye” moments)!