Home / His beautiful story appears in “Chicken Soup for the Soul”

His beautiful story appears in “Chicken Soup for the Soul” 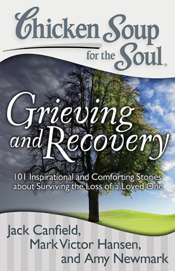 Over the past few years on DT, many of the great edited videos (including THIS and THESE) were thanks to my good editor friend from high school and Penn, David Chalfin (C’96).

Recently, Dave’s touching story about the strength and resiliency his mother showed in the wake of his father’s death when he was 16 appears in the Chicken Soup for the Soul: Grieving and Recovery

I’ve read it and it is really written beautifully.

After the jump, check out an excerpt from his story.

A small passage from Dave’s short story entitled “The Chinese Chicken Incident” page 186 of Chicken Soup for the Soul: Grieving and Recovery

“When I entered the kitchen, I saw a woman I hardly noticed. She stood frozen above a smoking wok, vegetables and poultry strewn about the kitchen, bits of cashews in her hair and flour covering her face like a Kabuki performer. And there, I could see it, however faint it was; a vertical streak which extended from the corner of her eye down her cheek breaking up the purity of her white mask.” 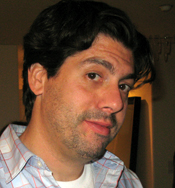 “I wrote it as kind of a tribute to my mother and to thank her for all the support she provided me after this and beyond. After growing up with the dreams and aspirations of being a writer, I followed another career path as an editor. So after a long hiatus, this is the first piece of writing I’ve ever had published. The irony is not lost on me that the first story I have published is about the passing of my father on the 20th anniversary of his death.“

Dave is currently editing a show for the Speed Channel called “Car Warriors” and has worked on such shows as “The Fabulous Beekman Boys” (Planet Green), “Fantasia for Real” (VH1) and “25iest” (Oxygen).  He has also been editing short films and webisodes, including a short called Mental for which he recently won an award for editing at the 15 Minutes of Fame Film Festival.  Check out his work below and on his website HERE