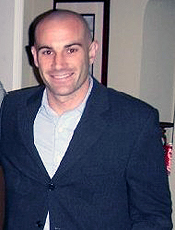 In years past, Ryan Levin (C’98, Without a Net, Theater Arts, Penn Players) and his writing partner Nye Warburton (C ’97, Without a Net) had co-created an animated Comedy Central web series and even helped roast Bob Saget at the Friars roast.

After the jump find out who, check out the trailer, …and follow the 17 steps he took to turn this film into a reality (must read!)

In Ryan’s film Some Guy Who Kills People, a lonely man, fresh out of the loony bin, returns to his small hometown seeking revenge on those he deems responsible for his miserable life. 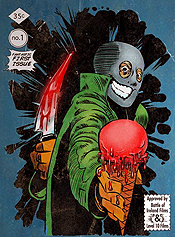 The film is directed by Jack Perez (“Mega Shark vs. Giant Octopus

“) and executive produced by John Landis (“An American Werewolf in London

” –remember THIS Penn alum starred in it?).

Did I mention that the film stars Barry Bostwick

Ryan based this film off of The Fifth, a short film he wrote and directed which found great success on the film festival circuit in 2007-2008.  After making The Fifth and watching it prove tremendously successful on the domestic and international festival circuits, Ryan believed there was potential for a feature film version.

For those of you who are filmmakers, per Ryan, check out how he turned his short into a feature:

“TURNING A SHORT FILM INTO A FEATURE FILM
Turning The Fifth into Some Guy Who Kills People was a simple 17-step process (if you omit 9,531 steps):

1. In early 2007, Ryan writes a 206-page first draft that sucks. Ryan’s agent tells him that a feature version of The Fifth is a waste of time, as no one wants a script with a serial killer protagonist. Three weeks later, Dexter

2. Ryan works on the script for several months, but can’t figure out how to make it dramatic, funny, scary, suspenseful or entertaining. He considers becoming a fireman. They’re not hiring.

3. Ryan returns to the script, convinced there’s something in that incoherent mess of pages. He writes draft after draft, adds and cuts dozens of characters, plays with 28 different endings and toys with the notion of turning Some Guy Who Kills People into a Luke Wilson-vehicle rom-com.

4. Ryan finds two other producers –Michael Wormser and Micah Goldman — to help raise the money for the “finished” script. They discuss every financial lead they can think of. Over the next several months, every possible source of financing dries up.

5. Ryan spends some of his hard-earned Bar Mitzvah money to hire a wonderful casting director who truly believes in the script. She “attaches” some “name actors” to help raise the financing.

6. The “name actors” inspire interest from several rich people. The rich people then remember they’re rich because they don’t invest in independent films.

7. The attached “name actors” move on to other projects.

8. Michael and Micah send the script to a director they think might be interested. The following day, John Landis

calls to say he enjoyed the script and wants to meet for lunch.

9. After a four-hour lunch, where Ryan, Michael and Micah learn from Landis who in Hollywood is “insane,” and who is just “crazy,” Landis shows a real interest in directing the film.

10. Over several weeks, Ryan and Landis make key improvements to the script.

11. A production company promises to secure financing if Landis will sign on as director. On the same day, a far more prestigious (more prestigious than this?) project Landis has been working on gets the green light and Landis is forced to back out as director of Some Guy Who Kills People.

12. Despite the setback, the production company assures Ryan, Michael and Micah of their intent to finance the project… as long as another experienced director is attached. The company e-mails over four names that qualify: three are A-list directors. The fourth is Alfred Hitchcock.

13. The next day, Ryan, Michael and Micah discuss making the movie for whatever cash they have in their wallets. They decide $9.38 won’t be enough. Ryan goes home and curls into a tight ball.

14. Ryan finds a few “angel investors” who offer to put up 10% of the original budget. Ryan rewrites chunks of the script to fit the new budget. When he deletes the action line, “The helicopter crashes into the train and explodes,” Ryan sheds a few tears.

15. Ryan, Michael and Micah hire the wonderful Jack Perez to direct. The four of them, along with their intrepid casting director, spend weeks putting together a stellar cast that everyone actually prefers to the “name actors.” The investors respond, “Is Will Ferrell really that busy?”

16. Alongside line producer, Kristin “It’ll Work Out” Holt, Ryan, Michael, Micah and Jack assemble an amazing production crew, and shoot Some Guy Who Kills People in 17 days (it rains 12 of them).