“If anyone would pay me to do what we did at 34th street, that would be my career.” So far so good.

You’re on the road and stop to grab a burger at McDonalds or Burger King.  You know what you’re getting no matter what city you’re in.  But have you ever stopped to think about how and when these fast food chains started?

One Penn alum did and wrote a compelling book about it.

More about this Penn alum author and his new book after the jump.

Last we reported about Stephen Fried (C’79 34th Street co-editor, BF Scholar), he had a tell all book about sex, love, and dirty laundry

.  His new book is now out and it deals with drama of a different sort as it documents one of the earliest innovators of the American hospitality industry. 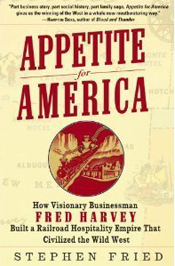 In Appetite for America: How Visionary Businessman Fred Harvey Built a Railroad Hospitality Empire that Civilized the Wild West

, Stephen (adjunct journalism professor at Columbia University Graduate School), recounts the life of Fred Harvey and examines how this entrepreneur was responsible for chain restaurants, hotels and bookstores.  (Apparently this guy owned 65 restaurants and lunch counters along the Santa Fe Railroad from Chicago to LA!)  Stephen then further examines how Harvey’s restaurant and hotel locations dovetailed with westward expansion.

How did Stephen get his start as an a author?  At Penn of course.

Stephen’s start as an author began when he wrote nonfiction at 34th Street as a sophomore.  He was also mentored by Nora Magid, then Penn’s “one-woman journalism school”. Stephen told me that he always said “if anyone would pay me to do what we did at 34th Street, that would be my career. So far so good”.

Check out an excerpt from his book HERE