If you’re an aspiring musician, you’ll want to tune into this post…

What happens when you’re in a band at Penn and graduate …and now only 2 of the members want to embark on a music career full-time?   You embark on your journey in front of all of Penn to watch and learn from in a new exclusive DT monthly video series called “Real Jobs Aren’t My Forte”.

First, to give you some background, at Penn, Ben Naecker (C’09, Water Polo) (guitars, cowbells) and Blake West (W’09, Jazz Combos) (keyboards, pyrotechnics) were part of the band Satellite Heights which was composed of four Penn musicians, and a non-Penn singer who lived in the area. It was a progressive, modern rock outfit that recorded one album in Brooklyn in the fall of ’08. That album was called Launch Sequence, and was released on iTunes in March of ’09.  All have graduated and the band is now defunct. Ben and Blake now prepare for their move into Austin’s music scene. 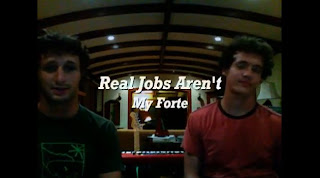 This new DT Vlog will document the life of Penn graduates who go on to become musicians, so that others can learn from their experiences. Ben and Blake will be getting into all the gory details that they can once a month on DT in a 3 minute post.

Watch Episode 1: “Don’t Panic” above …where Ben and Blake explain who they are, why they’re moving to Austin and why you shouldn’t panic if you too are embarking on this music journey.