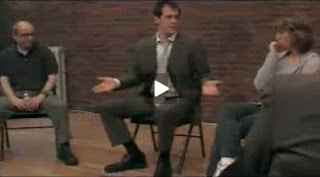 What do you get when you mix a sex addicts, a tourist, an immigrant and a psychic?

You get a new Penn alum film.

The film is a collage of eleven tales capturing thirty-something New Yorkers struggling to find love and connection in the big city. Among the elegantly drawn characters whose lives briefly intersect on a New York City bus are a sex addict, a tourist, an Italian immigrant, and a woman newly awakened to her own psychic powers who senses imminent tragedy.

Stay tuned for this film’s TV premiere on the Sundance Channel in 2008!

Click here for more info about the film, the festival listings and awards it has racked up so far!

Click here to check out other Penn film producers

Click to see what other 1998 Penn grads are up to