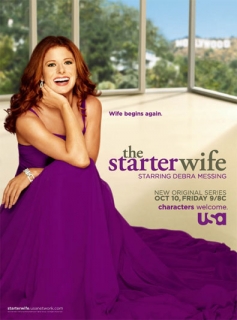 …While we’re speaking of Jon, his show The Starter Wife debuted this week. For those of you who haven’t seen this on the USA network, it’s kind of Sex in the City meets a bit of Desperate Housewives. Debra Messing’s performance is definitely stellar here showing her Grace-like humor combined with some nice touching/authentic moments we haven’t seen from her before.

From youtube, “The Starter Wife is a sexy, savvy and wickedly funny tour de force about life after divorce and one woman’s quest to redefine herself after years of marriage to a Hollywood studio head. After being blacklisted from premieres to pilates, Molly Kagan (Debra Messing) searches to rediscover life after divorce. A brief respite in Malibu and some oh-so-Hollywood friends prove to be the perfect cocktail for her transformation from “Starter Wife” to her new life.”