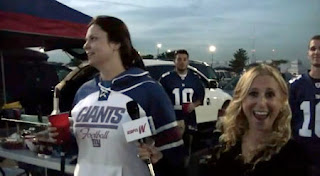 Over the years on DT, I’ve covered Jordan Zucker’s (C’97, Theta) entertainment journey as she’s appeared on “Scrubs“, cooked with Bobby Flay, interviewed NY Jets players, got featured on the morning news for her Girls Guide to Fantasy Football league, tried out for Oprah …and now has been invited to join the team at espnW where she will be making videos throughout the fantasy football season.

After the jump watch Jordan’s first video where she quizzes Giants fans about their team!

Jordan wants everyone to know that she’s super excited about this and attributes the deal mostly to the fabulous animal print, cute but office-appropriate dress she wore to the meeting over the summer. (Pic of dress would be posted had Jordan still not recovered 90% of her life from computer failure this week.)