Home / My One Degree of Separation From Kevin Bacon (VIDEO)

My One Degree of Separation From Kevin Bacon (VIDEO)

Posted on October 16, 2009 by Matt Rosler in Exclusive, Traditions | 1 Comment 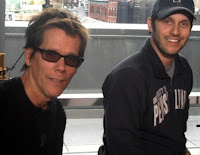 On Wednesday, while all decked out in my Penn hat and sweatshirt, I had the awesome opportunity of meeting the Bacon Brothers: Kevin Bacon and his brother Michael Bacon while I was in NY visiting the SoHo Esquire House!

As you’ll see in the video above, Kevin and Michael told me that on December 5, the Philly native Bacon Brothers will be headlining a benefit concert at the Electric Factory in Philly to raise money for the Mummers to preserve the tradition of their annual parade.

At the event, the brothers will be singing ‘New Year’s Day,‘ a song they recorded along with 20+ Mummers.