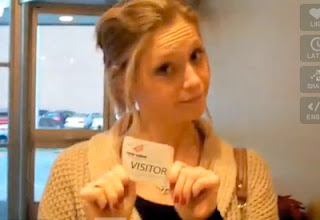 A few months ago we introduced you to Jess Garvey (C’09), DT’s “Starter Reality Star”.

We’ve watched her go on an actual audition for a Special K commercial and drive a cart around the Universal lot.

Today, Jess brings us with her to her manager’s office as they plan for pilot season and also brings us to her “day job”.

Watch the episode after the jump (and a note from Jess)!

“Everybody wants to know what goes on behind the scenes so I decided to introduce you all to where I make the big bucks, for now of course, and where I have management. I met with my manager before the holiday to touch base and go over what I have been doing the last couple of months. I really wanted to chat about 2011 and get a sense of what to expect this year and our general game plan. We talked about pilot season and he said that most of my action will come towards the end of it in March. This is a time when casting directors are willing to see new talent because there are roles that they need to fill and have not found the right person yet. The CD’s (casting directors) usually call in actors who have been cast in previous pilots first and also flat out give offers to celebrities that fit certain roles. After they go through that bunch of people there are usually still a couple of roles that have not been filled and the CDs will call up managers and agents that they have good relationships with and ask them to send whoever they represent who might be good. Ohhh the hierarchy of the acting world. I would say I am like a little goldfish ready for someone to scoop me up out of the sea of big fishies. Yessss I just made that awkward analogy!  Anyway, my manager and I also picked a new headshot for him to use because it’s best to switch photos every 6 months so that my look does not get stale. There is some science behind the madness!

Of course, I need to scratch everything I said above because I got an audition for an MTV Pilot! It always happens when you least expect it! The opportunity was this past Saturday for a series regular. Now don’t be sad that you are just finding out about this because you are going to be able to see me prepping and at the audition in my next video!

Stay tuned for what comes my way in the new year!

Yours Truly,
The Starter Actress”