Out of 216 people, this Penn alum is the winner 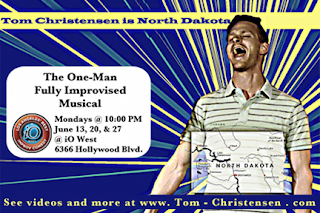 A couple of weeks ago, we covered the brilliant musical mind of Tom Christensen (W’03, Mask and Wig) as he competed in a national musical improv competition.

After a total of 216 improvisors entered into the Improv tournament, Tom, on behalf of “North Dakota” (the only one-man team) won four heated battles and then the championship!

After the jump, watch his fantastic opening number, “Voting is Easy,” from the winning show.

Amazing how quickly his mind works!  The full show, AUTHORITY, which features the raunchy sexcapades of a mayor with striking similarities to Los Angeles’ own Mayor Villaraigosa lives here.

As the winner, Tom gets an extended run of shows at iO West, so you can see Tom Christensen IS North Dakota on Mondays in June!

Watch this space because one way or another, we need to get Tom to do a musical about his time at Penn!

…And to my Penn alumni relations friends, consider Tom for the entertainment at the upcoming Alumni Award of Merit Gala!  (He also would be a great act for our upcoming Los Angeles Pennfest event!)