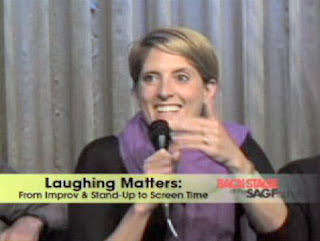 Recently, comic, producer and casting director Lesley Wolff (C’93, Bloomers), appeared on the Laughing Matters Panel at the SAG Foundation and was dishing out advice about what actors and comics should do with what they send to casting directors.

After the jump watch this clip where Lesley talks about a big trap actors and comics often fall into when sending their reels.

If you’ve ever wanted to do stand-up, but were afraid, Lesley is the person to train under! She has an ongoing popular Los Angeles workshop called Fresh Faces Comedy” at the Hollywood Improv you should check out. I’ve been to several of her shows and she really knows how to bring the funny out of novice stand-ups.

Actors who are considering moving to LA, be sure to catch up on all Penn alum actor Alex Weber’s DT exclusive vlogs HERE