In honor of Valentine’s Day, Carlin Adelson (C’09, Under the Button’s original sex and love blogger) just released a must-watch video below demonstrating that meeting the perfect guy is harder than you’d think: 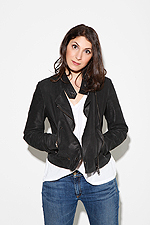 Carlin is a New York based comedy writer/actress/producer and an alum of the Upright Citizens Brigade Theatre. Her sketch group, The Charlies, has been featured on Funny or Die and Glamour and have appeared in several film and comedy festivals including the revered Chicago Sketch Comedy Festival. Since 2013, Carlin had starred and produced her original webseries “Cuddling With Carlin” which won Best Web Comedy at the ITV Festival in Vermont. Her voice can be found in Geico ads on the Internet as the obnoxious baby. Most recently, she pitched a web series “Above Average”, and is now shopping for her creative team to produce the show.

…Remember when Carlin posted this “Racist Zombies” video for Halloween?