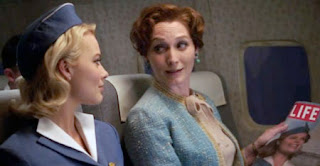 One of my favorite new shows this TV season is ABC’s “Pan Am”. The show does a great job romanticizing the 1960s while skillfully unfolding the backstories of the show’s characters. (and yes ladies, now’s the time to start thinking about a “sexy” Pan Am halloween costume)

When I was watching the 2nd episode this week, a Penn alum’s name in the opening credits surprisingly caught my eye.  And she happens to have had a pretty big role in the show.

After the jump, find out who this Penn alum is, watch a clip of her in the show and find out what other big films and broadway shows you may have seen her in!


In the clip above, Kate Jennings Grant (C’92, Counterparts) plays Judith Cameron, the mother of sisters Kate and Laura. In this past week’s episode (spoiler alerts ahead!), Judith boards the plane where her daughters are stewardesses to try to convince her daughter Laura to return to the man she left at the altar.  I’m sure we can expect future episodes with Kate.

And if you’re wondering where you may have seen Kate in the past, she played Diane Sawyer in the Oscar nomaminated film Frost/Nixon, …and she’s been on Broadway!

In the clip below, watch Kate perform “Marry the Man Today” (as Sarah Brown) with Lauren Graham (as Adelaide) from her 2009 role in “Guys and Dolls”.  Kate’s got a beautiful voice!