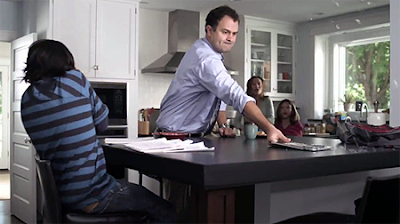 application. In the spot, Neil demonstrates that the new Newsday Ipad

app is better than the newspaper in all kinds of ways, except for one… In a matter of 4 days, the video became viral and reached 1,000,000 hits!

After the jump, watch the video and find out about its controversy and why it was soon abruptly removed from the web!

In Neil’s reel above, check out the infamous Newsday piece.  (FYI, if you watch the rest of his reel, I think Neil is great and is perfectly cast as the nice, everyday guy in each of the commercials you’ll see.)

So why was the IPad

“Abruptly, Newsday removed the spot from their page, and, thereby, all the pages in which that link had been embedded. The Blogosphere has speculated and pieced together (mostly off of a tip from an anonymous Newsday employee) that Apple filed a Cease & Desist letter, or threatened to remove their App from the App Store, objecting to “large, jagged” glass pieces into which it shattered (which is not what actually happens, but WAS the intent of the creatives making the spot).

Now, the internet being the internet, there are many copies out there, and while as many people reacted to this (sometimes called “The Streisand Effect”; when you attempt to silence something, it gains more attention), more copies were put on other YouTube pages, and the hits kept coming. Slowly, however, they are all disappearing, as Newsday claims copyright infringement. When contacted, Newsday and Apple have had no comment. On one hand, it’s pretty novel to be involved with a BANNED spot; on the other hand, it’s somewhat irritating to have a successful spot smothered before it was barely out of the gate, and thereby prevented from any other public showing.”