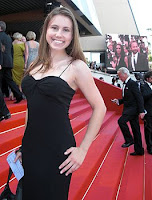 All last week, I posted about Brian Tran’s (W’10) inside scoop of his time at the Penn in Cannes Program.

As our final “Cannes” post, Julie Blanc (W’12), another one of my great DT correspondents fills us in on advice given this year from Penn alumni:

Click HERE to read on about their advice including:

“Imagine a workday where meetings start at 8 a.m. Within a few hours, you have spoken with representatives from just about every continent. Every evening dressed in black tie attire, you attend two to three film screenings, and finish negotiations at 4 a.m. Wake up in four hours and be ready to do it again-for two weeks straight, all the while being in the beautiful South of France. That is what the Cannes Film Festival is like for those involved on the business side, like Chairman and Chief Executive Officer of International Creative Management Jeff Berg. On the surface, this international gathering at the Côte d’Azur offers a chance to bask in the sun, relax on yachts, see beautiful people, and watch groundbreaking films. The serenity of this beach city is just a mirage-for those on the inside of the industry it is non-stop hustle and bustle. The schedule is grueling for these twelve days because Cannes is at the epicenter of the entertainment world. This is one of the only times annually that everyone congregates in one spot, so all of the companies need to maximize each day to meet their goals.

One of the personal highlights of the Penn-in-Cannes program for me was the opportunity to meet with prominent figures of the entertainment industry connected to Penn. All self made success stories Jeff Berg, Geoff Gilmore (C’74), and Rick Hess (C’84) offered advice on the current state of the industry as reflected by the film festival, opportunities for change, and how we as Penn students can get our foot into the door of this exciting industry.

Our first meeting was with Jeff Berg; his expertise in his field was immediately evident for he had such a prevailing presence. He emphasized how the Cannes Film Festival is unique- it is truly the most important international film gathering for marketing, financial, business, and creative people. His description of his jam-packed schedule said it all-I was out of breath just after hearing it! Unfortunately, the global financial crisis has also hit the entertainment industry hard as fewer companies sent representatives to Cannes this year and several top banks have closed their doors to media lending. The world of film is interconnected, and he showed how important it is to “make money for your partners”-relationships are fundamental to this business. We were so fortunate to get the chance to speak with Mr. Berg during two of the busiest weeks of his profession. Eyes of the students lit up when he mentioned what the industry is looking for in the next generation of employees: individuals with an understanding of old media with new media skills. Media aficionados-take notes.

Our second meeting was with Penn alum Mr. Geoff Gilmore (C’74), former director of the Sundance Film Festival and current director of the Tribeca Film Festival. He discussed the effect of film festivals on the independent film industry from a creative and economic standpoint. The film market place is officially saturated as too many films have been produced in the past few years-everyone wants their shot at becoming a recognized filmmaker. This only makes it harder for films to succeed and make a splash. However, recently, another factor has come into the equation: the changing nature of media. Mr. Gilmore pointed out that the new generation watches film or television mostly on computers. Youtube and Google are becoming platforms for anyone in the world to publish a film. Mr. Gilmore asked the question facing everyone in broadcasting today, how do we capitalize on the Internet, the so-called “promised land”?  Mr. Gilmore was very blunt and honest about the business. It was important to hear his realistic perspective, because even though things may be broken right now, it is actually a great time to break into the business and make a change.

Penn alum Rick Hess (C’84) confirmed that this truly is a business of passion. His enthusiasm and love of movies shined through his upbeat voice and demeanor. There is no one set formula to getting an “in” to entertainment- every path is distinctive. His entrepreneurial spirit was evident, as he has had his hand in producing and is now the new head of Creative Artist Agency’s Film Finance Group. While at Penn, he read all of the materials Van Pelt had to offer on the history of the movie business and encouraged us to do the same. Our excitement for the industry needs to be consistent with our desire to learn about it. He told us to never accept “no” and to persevere. Meeting these three men with multifaceted careers and impressive resumes in entertainment demonstrated the diversity of opportunities this industry has to offer. Jeff Berg, Geoff Gilmore, and Rick Hess have successfully mastered the balance between extensive knowledge in art and culture with business savvy. These Penn alum made it happen-now go out and make your mark.”