Home / Penn Alumni pair go “All In” on Facebook

Years after being Penn freshmen roommates in the Quad and then later as housemates on Chancellor Street, Seth Gerson (C’95, ZBT) and Gregory Milken (C’95) formed a technology gaming company with a hot facebook game you’ll want to check out done in conjuntion with a popular Las Vegas hotel!

More about their game and very Penn-centric company after the jump! 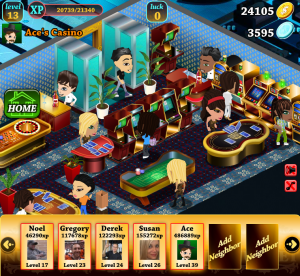 Now available on Facebook, the game has players building their own Vegas casinos out of many popular table games, including Blackjack, Video Poker and Roulette. As they earn money from maintaining and growing their casino floor, players can add a unique style to their casino with their own customized layout of furniture and decorations. When they’re feeling lucky, players can then visit their Facebook friends’ casinos and level up their avatar by playing games to increase their stacks.

How did Seth and Greg get their start?

“I was at Gregory’s house, and he asked me about Last Legion Games (recently renamed to AltEgo).  I told him about the technology.  Gregory said, “I want to invest.”  I tried to talk him out of it, because we had been friends for so long, and I told him that we could end up not speaking.  He said that if I did not let him invest, he would never speak to me again.  There was not much I could say to that.  Aside from investing, Gregory said that he wanted to be operationally involved immediately, and he is the COO here.  We now run the business together.”

Together, Seth and Greg launched the first cloud-based iPhone MMO game, Watchmen: Justice is Coming, in conjunction with Warner Brothers, and have additionally released other successful games: “Head Shoulder Knees and Toes”, “My Name”, “Pet Sematary”, “Squasth the $treet”, and “Polyghost”

Next up for them:  allowing users to take one avatar into any game on any platform. Their AltEgo technology is currently featured in Golden Nugget Vegas Casino game and  a Software Development Kit (SDK) will be available for game developers next month.

…Speaking of gambling and Vegas, remember these stories about Penn alumni?