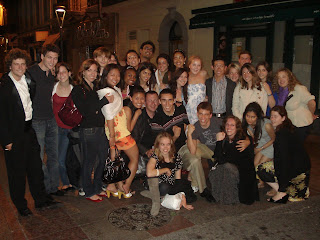 Today, she tells us about the 2 Penn alumni and 1 Penn parent Hollywood power players she met in Cannes!

Click here to find out who they are and the inside advice they dished out!

Check back to find out from Felisha what it’s like to get caught up in the frenzy of Cannes.

“Penn Alumni are everywhere, including in all facets of the entertainment industry.

Through the Penn in Cannes program we had the privilege of meeting 2 successful Hollywood Penn alumni and 1 accomplished Penn parent in Cannes.

Rick Hess (C’84) visited the class at the College International dormitory, and was happily surprised to remember that he had stayed in the same dorm decades earlier.

Despite his role as the head of Creative Artists Agency Film Finance Group, Rick Hess has never lost his charming personality and developed quick rapport with the class. The names he dropped during the lecture were A-listers such as Will Smith and George Clooney. It was exciting to hear insider stories about the celebrities at the Festival and made the experience more personal.

Rick explained Jada Pinkett Smith’s directorial debut in The Human Contract and the promotion that went behind promoting the movie. Will Smith flew in from the States to host the premiere party and shake hands with every distribution contact he could find. According to Rick, most stars do not work as hard and aren’t as passionate to their projects. But Will Smith has the magic touch and everything he is associated with turns into success. His recent film, The Pursuit of Happyness (2006), grossed over $300 million in worldwide sales. Much of the success is due to Will’s charisma and the public’s willingness to support his career.

Geoffrey Gilmore (C’74, Penn in Pictures 2002 panelist), Director of the Sundance Film Festival, also came to the College International to talk about his role in shaping the second most important film festival in the world.

More so than in Cannes, the Sundance Film Festival is all about the acquisition of films. The international community convenes at the festival to conduct business on distribution rights. Oftentimes a film is parceled off into different regions and distribution rights can be held by various countries in different regions. The United States is the hardest region to enter because of the monopolization of Hollywood offerings. It is very hard for international cinema to infiltrate U.S. theaters, other than at Indie theaters.

The production of independent and mainstream films is handled very differently. Great writing drives independent films and the content is of utmost importance for a movie’s success. As a result, the product is often more creative and groundbreaking. In contrast, mainstream films are driven by market demands. There tends to be a template for blockbusters that Hollywood follows which can seem repetitive and overdone. But since the formula works at the box office, Hollywood is hesitant to stray from the tested model.

Without a doubt, Indie films are more creative. But oftentimes, they expect too much out of the audience. Movies are a great way to relax and forget about the stresses of the week. For the American public, it is much more pleasing to shut out stresses and just enjoy the movie. The film may not be amazing, but the common moviegoer isn’t looking for the next new thing. They like familiarity and comfort, as opposed to leaving the theater confused.

I agree that Indie films have stronger character and better messages, but perhaps only the true film enthusiasts can appreciate the work. Perhaps expecting the common audience to figure out gaps in plot and to wade through artistic license is too much to ask. International films face detachment from the American audience. Subtitles and dubbing are a huge deterrent to wide American distribution. People say Americans are lazy, and when it comes to wading through 2 hours of subtitles, I wholeheartedly agree. Unless English is spoken on screen, international films face huge hurdles in American theaters.

While waiting in the hallway outside of Jeff Berg’s (Penn parent) hotel suite at the illustrious Carlton Hotel, I began to realize how important this man was. His staff greeted us inside of the classy suite and we piled around the living room with its huge bay-window view of the Mediterranean Sea. Jeff, Chairman & CEO of International Creative Management agency (ICM), explained the dichotomy of the Festival de Cannes…

The more visible parts of the event are the red carpet premieres, movie stars, and hundreds of screenings. But the important people in the industry are working feverishly in meeting rooms throughout the French Riviera, broking multi-million dollar deals. They take advantage of Cannes as an international gathering place, using the Festival as a platform for everyone in the global industry to assemble together and conduct meetings on distribution rights.

…As I am learning more about the business of film, I am considering career opportunities making use of my business background. There is no business like show business, and I would surely like to be a part of it in the future.”

Advertise on DT | Get the newsletter! | Join the DT Facebook Group!