Home / Penn muggles running around with brooms in between their legs

Penn muggles running around with brooms in between their legs

Posted on November 15, 2011 by Matt Rosler in Uncategorized | 0 Comments 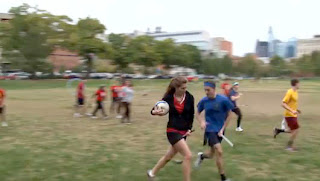 I had heard that a group of students at Penn formed a Quidditch Team at Penn -based on the Harry Potter Series but I thought it was a joke.

But the jokes on me because it’s real and we now have video!

After the jump watch these Penn muggles in action and learn how the game is played.

Learn about how the roles of “Chasers”, “Keepers”, “Beaters”, the “Seeker” and the “Golden Snitch” are incorporated into the game.  Kudos to these students for keeping things fun!