Several years ago, I did a story about film producer Jody Girgenti (C’98) and how her film (you may have heard of) was hitting the festival rounds.

Since then, Jody has produced content for NBC Digital Studios, CourtTV, corporate clients, worked as a commercial producer, and is still focused on film.

After the jump check out a clip from the film, listen to the great soundtrack, and find out Jody and her husband got Duncan Sheik on board! 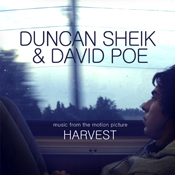 In Harvest, three generations of a family come together one summer, around the eventual passing of the patriarch of the family, a WWII veteran.  Gathered at the family home and in and around their beautiful shoreline town, years of resentment and betrayal within the family surface, and the grandson, a college student, does his part to hold them all together, growing up in the process.

Harvest is a poignant  and moving story that is ultimately uplifting, with moments of humor anchoring this realistic portrait of a family hanging on to what was, what is, and to each other.  It’s also a film about how we all come of age, in our own ways, both young and old.

In conjunction with the theatrical release, the digital EP “Duncan Sheik and David Poe: music from the motion picture Harvest

” was just released.  Listen to this music below! (I love it!)

Get the full song on iTunes

Get the full song on iTunes

How did Jody and her director husband Marc Meyers get Duncan Sheik for this project?

“Duncan’s manager for film projects is Lillian LaSalle, and she was the initial link. One of her actor clients, Daniel Raymont, was cast in HARVEST, and so she knew about the project. Duncan had an uncommon opening in his busy schedule, and he was seeking a film project to get involved with, along with fellow musician David Poe. Marc and I met with Duncan and David when we were editing the film. Marc had a very clear idea of the direction he wanted to go in with the music, and that singer/songwriter acoustic vibe is both Duncan and David’s sweet spot. It was a natural collaboration that came together very organically. Duncan and David then saw a cut of the film, went away to record various pieces of instrumental music inspired by the film. Much of that music is in the movie. Separately, there was a need for several original songs with lyrics. Marc and I collaborated with the guys in conversations at our various apartments. They would then go off and try to create songs that worked for the movie based on all that we collectively discovered and discussed. The result was an EP of songs that works perfectly for the film for which they were created, and songs that work just as beautifully on their own….”

More about the film HERE