Posted on November 9, 2010 by Matt Rosler in Uncategorized | 0 Comments 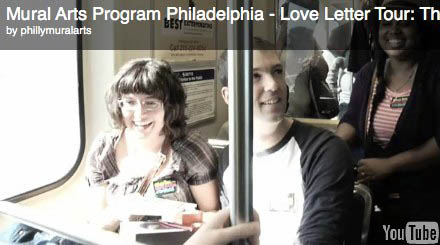 Recently, both the Glee Club and the Penn Singers Light Opera Company helped pull off the mother of all serenades on a Philadelphia SEPTA train during a popular Philadelphia attraction tour.

After the jump watch these groups partake in a surprise wedding proposal!

I think you’ll agree that this video is quite moving. 😉

So Canadian couple Todd and Meaghan learned about the Mural Arts Program’s Love Letter Tour and coordinated an extended layover in Philadelphia (while traveling to France) to experience this tour.

Todd then got in touch with the Mural Arts tour office to let them know he wanted to propose to Meaghan on the tour…so the office then got Penn’s acapella groups involved.  The result is this emotional video below.

It appears at minute 2:40 that the woman finally realizes that she’s not just getting randomly serenading to… but that this may actually be leading to something much, much bigger.  (Watch this video through to see what I’m talking about.)