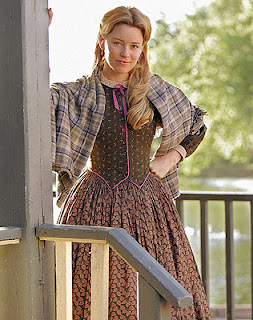 Actress Elizabeth Banks (C’96) has been doing everything from comedies, to dramas to horror films. Well, come this Sunday, she’s about to saddle up and do a Western in CBS’s Comanche Moon, the 3 part series prequel to the Pulitzer prize winning book, “Lonesome Dove”.

…Yes, Liz typically does play the young sexy roles as you may recall from Wet Hot American Summer (a favorite movie of mine!) to The 40 Year Old Virgin. And yes, she plays them all well!

Per cbs.com:
“Val Kilmer, Steve Zahn, Rachel Griffiths, Karl Urban, Linda Cardellini, Elizabeth Banks and Wes Studi star in COMANCHE MOON, a new six-hour mini-series based on the book by Larry McMurtry, and the final chapter in the “Lonesome Dove” saga to be made into a movie, will air Sunday, January 13, Tuesday, January 15 and Wednesday, January 16 at 9pm et/pt. Academy Award and Golden Globe Award winners Larry McMurtry and Diana Ossana are the executive producers and writers.

COMANCHE MOON, the prequel to McMurtry’s bestselling and Pulitzer Prize-winning book, “Lonesome Dove,” which was the basis for the multiple Emmy Award-winning mini-series “Lonesome Dove,” follows Texas Rangers Augustus “Gus” McCrae (Zahn) and Woodrow F. Call (Urban), now in their middle years, as they continue to deal with the ever-increasing tensions of adult life–Gus with his great love, Clara Forsythe (Cardellini), and Call with Maggie Tilton (Banks), the young prostitute who loves him and bears him his son, Newt (Joseph Castanon). Kilmer plays Captain Inish Scull, a Yankee aristocrat and hero of the recently concluded Mexican War. Griffiths plays Inez Scull, the Captain’s sexy wife who doesn’t hesitate to fill her time with other men when he’s away from home. Wes Studi plays Comanche Chief Buffalo Hump.

Two proud but very different men, McCrae and Call enlist with a Ranger troop in pursuit of three outlaws: Buffalo Hump, the great Comanche war chief; Kicking Wolf (Jonathon Joss), the celebrated Comanche horse thief; and Ahumado (Sal Lopez), a deadly Mexican bandit king with a penchant for torture. Assisting the Rangers in their wild chase is the renowned Kickapoo tracker Famous Shoes (David Midthunder). They are joined by their comrades-in-arms, Deets (Keith Robinson), Jake Spoon (Ryan Merriman) and Pea Eye Parker (Troy Baker), in the bitter struggle to protect an advancing western frontier against the defiant Comanches who are determined to defend their territory and their way of life. The Rangers also encounter Buffalo Hump’s violent outcast son, Blue Duck (Adam Beach).”

Check out our 600+ Penn videos

Check out which undergrads and alumni are registered on DuelingTampons.com