Learn more about what I mean after the jump!

” it seems like Hollywood is getting ideas for TV shows from the web. 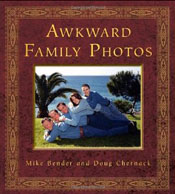 On that note, Guarascio and Port are developing  “Awkward Family Photos”, a show that will be based on the website and book

of the same name from Mike Bender and Doug Chernack.  (source)  The photos that are showcased are totally random …and horrid!   Curious to see what David and Moses develop!

…And this is just another story of ABC continuing to love on our Penn alumni!

Are you coming to LA’s 2010 “Penn in Pictures” event this Monday 10/11? (with another great panel of accomplished alumni in the entertainment industry!)