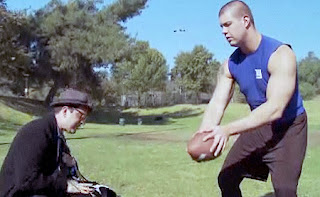 Because this weekend is the Superbowl, I thought you’d all appreciate a viral video created by the Penn alum who created a musical interpretation of The Godfather, Tom Dimenna (C’02, Quarterback for Varsity Football Team).

In Tom’s film THE PURISTS, two football coaches speak out about what is truly, “Old School”.

The video stars Tom as Walter “Gibbs” Branigan and and fellow Penn alum Jeff Hatch (C’01) as Kyle Rogers, a third round draft pick out of Penn State.

After the jump, watch the short and be sure to check out these old timer’s reaction to “artificial turf”!

The Purists is the story of Kyle Rogers, a third round draft pick out of Penn State, who successfully climbed the ranks of the NFL to start at offensive tackle for the New York Giants. But like so many other pro athletes nowadays, Rogers suffered a severe back injury in his first season, and was soon cut.

Word on the street in the NFL is that Rogers is damaged goods, but he hasn’t quit, and continues to train at an ultra exclusive training facility in Los Angeles. Running the facility are a legendary pair of old-fashioned football coaches named Walter “Gibbs” Branigan and Dean Bryce Swanson Van Syckle the 3rd, who are determined to get Rogers back in the league with the tried and true methods of the old school.

…And check back on DT next week for another special little gift that Tom will be sharing with us!

More of my Penn football videos and stories (on and off campus!) HERE