Home / The horrific results when 2 Penn creatives come together

The horrific results when 2 Penn creatives come together 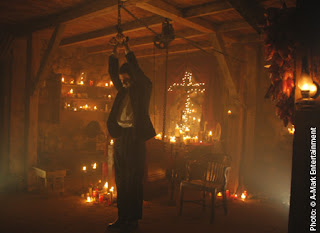 What happens when a Penn alum film producer works with a Penn alum writer to produce a horror film?

This is exactly what has happened in both cases when Todd Shotz (C’96, Glee Club, Penn Players), VP of Rifkin Eberts collaborated with writer Dan Kay (C’97) on Timber Falls.

Check out a great review after the jump!

I saw an advanced preview screening of the film about a month ago and I really liked it. I thought the story was scary and I especially thought the casting and acting was great (which is surprising for a horror film).

The film opens TONIGHT (12/7) in Los Angeles and I encourage all of you to check it out!

Click here to check out a clip from the film

Check out other Penn writers

Check out other Penn film producers

Here’s the review that appeared in Fangoria:

Part of the film’s success derives from the fact that everyone involved, from director Tony Giglio and scripter Dan Kay to the actors on down, have attacked the material with the conviction of people mining this territory for the very first time—or at least believing they are. The level of craft on view makes it a little easier to accept the fact that, say, a couple hiking in the West Virginia mountains wouldn’t immediately turn around and head home after a humiliating encounter with a trio of shotgun-toting hillbillies. But Mike (Josh Randall, a long way from his sitcom roles on ED, SCRUBS et al.) and Sheryl (Brianna Brown, thankfully a long way from her previous starring turn in NIGHT OF THE LIVING DEAD 3D) are made of stronger stuff and press on anyway. Taking the advice of friendly-seeming local woman Ida (Beth Broderick), they decide to forego taking the more frequently patrolled Donner Trail (heh, heh) in favor of the titular, more scenic route.

The Timber Falls path does indeed lead to a remarkable site which both offers a gorgeous mountaintop view and is within walking distance of a pristine lake. (Just as impressive as Tobian Moore’s lush location photography is the fact that that location was Romania, standing in flawlessly for the American South.) It’s not long after the couple have set up camp, needless to say, that someone or someones in the woods begin stalking them, and Sheryl soon goes missing. Mike understandably suspects those good ol’ boys with the firearms, but any reasonably alert genre viewer will cotton quickly to the fact that it’s Ida, and equally friendly-seeming park ranger Clyde (NEIGHBORHOOD WATCH/DEADLY END’s Nick Searcy, portraying a very different but equally convincing nutcase), who pose the real threat.

This pair turn out to be Christian fanatics who have very specific and twisted plans for the sinning unmarried fornicators who have wandered into their midst. The exact nature of those plans won’t be given away here, but they have been cannily conceived in that they require Clyde and Ida to keep their prisoners alive, and also to subject them to unpleasant physical abuse to force them to comply. Some of this punishment is meted out by the aforementioned disfigured relation, pointedly named Deacon (Sascha Rosemann), and while Giglio doesn’t shy away from the gore (well-wrought splatter FX by Jason Collins and Elvis Jones), he doesn’t wallow unnecessarily in it either.

The director also keeps the tension humming at a good pitch, maintaining sympathy for his beleaguered couple even when one or the other is doing things like blundering into a bear trap lying in the middle of an open clearing. There’s also a nice bit of irony in the fact that the backwoods trio who at first seem to be the primary antagonists eventually come to be Mike and Sheryl’s potential saviors—though the movie doesn’t fully pay this off by having the victims realize it. In other words, TIMBER FALLS is a movie of mixed blessings: one with strong performances in the service of familiar and occasionally dubious characterizations, that contains a number of genuine scares even as it lacks any real surprises and that delivers very satisfying climactic mayhem before capping it with a groaner of a final scene. But since it’s inevitable that we’re going to be flooded with lots more of the illegitimate children of HOSTEL, THE HILLS HAVE EYES et al. in the next couple of years, we can only hope that at the very least, they’re as professionally put together as this one is.