Home / 2006 / THE most important concept for a Hollywood writer

THE most important concept for a Hollywood writer 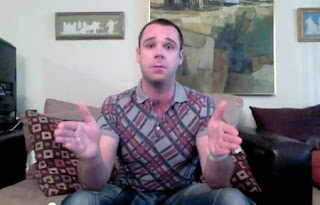 Last time we checked in with aspiring LA TV writer Rob Forman (W’06), he taught us all about “spec scripts” and what you do with them once you’re done in order to pursue a Hollywood career.

After his summer hiatus, Rob has now returned back to work as a writers assistant on “Army Wives” and is sharing some great tips for anyone thinking about writing a TV script.

Per Rob, “The spec you see below is a blue-collar family dramedy that, if you asked Rob in 2011 for his current opinion, is in need of a hook, something really obvious that reaches out and grabs you and demands your attention. Or, as we say in Hollywood, it’s “low concept.”

“I was lucky at the time to have a really long bulletin board in the office I was working at, so was able to lay out my index cards horizontally by act. There are four stories in the pilot, each lead by one of the family members (yellow is Katie, the wife/mother, blue is Scott, the husband/father, green is Grant, the son, and pink is Hayley, the daughter). The purple cards on the left show which Act each story beat is in. There’s an extra row on top for a “cold open” (the first two scenes of the pilot take place months before the rest of the action), but if filmed and shoved onto your television, that row would combine with the second row (“Act 1″) to make up everything before the first commercial break. As you may be able to tell, Act 1 and Act 3 are a little on the long side (and so is the script, at 65 pages)” 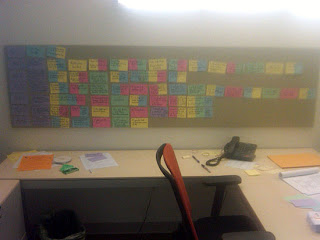 “I was also, apparently, in need of an arts and crafts project. Whenever characters were together or their storyline intersected with someone else’s, I made a combined card (procrastinating with scissors and scotch tape is fun). It helped me keep track of where characters were, helped me focus on transitions from story to story, and very visually let me know if a character hadn’t been seen in a while.”

“Below is my board for my Glee spec (and the second act is below as well… see previous blog post for the first act) Each grouping of multi-colored cards is a different scene (I didn’t have a ton of time to procrastinate and get crafts-y, so I just laid my cards out on the floor). Besides the act cards at the top (as well as a card that said “main title” in the middle of the left column)… the white cards are about the Mercedes storyline, purple are Kurt and Blaine (go figure), the blue cards are Will’s storyline (as well as group performance numbers… I ran out of colors), green is Rachel and Finn, pink is Sue (who, I found, was best used sparingly), and yellow is Puck and Artie.” 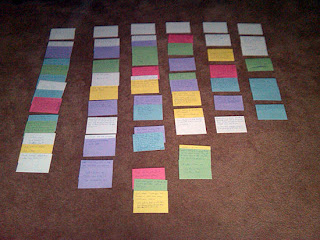 “As you can see, different stories take precedence at different segments. The Kurt and Blaine story reaches a big moment at the end of Act 2, but is more sparse later in the script, while the Artie and Puck story really doesn’t begin until Act 3 (but there are beats with each other them beforehand to set up their plot).

It seems a little “lopsided,” but it’s not necessarily a bad thing to have some stories heating up while others are cooling down or simmering.  In the “Army Wives” writers room, we call this kind of structure “well-lopsided,” whereas “Hard Knox”, where the characters are fairly evenly represented throughout and their stories run through the entire show, would be called “well-balanced.” In big ensemble shows with multiple story lines going at once, you’re never going to be able to service every character with an equal amount of screen time, so it’s just a matter of which story is most important at what time and what is best, overall, for the script.”

Catch up on Rob’s beginnings in Hollywood HERE