Home / The Penn alum musician wants to be a bitch, be she’s just too polite

The Penn alum musician wants to be a bitch, be she’s just too polite 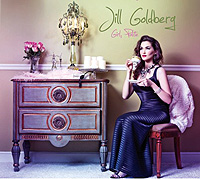 After the viral lady gaga cover she did, Jill Goldberg (C’04, Dischord A Cappella, Penn Choir, Wind Ensemble) has been hard at work on her new album “Girl, Polite”.

The album just dropped and she’s got some real catchy music on it with some interesting backstories.

After the jump, check out her new music video for “Not Worth It” and her anthem on how to be a stronger person.

In her new music video above, “Not Worth It” is about Jill’s dream career.  Jill tells me,

“I think back when I wrote it, I was in the Page Program and I was mostly thinking about television/film (remember when she worked for and sang for Martha Stewart?), but today applies to music. (although I think its worth it, just getting my frustration out 🙂 )”

“Not Worth It” is one of six tracks on Jill’s new EP, GIRL, POLITE

.  The album is a musical exploration of identity, transition, and empowerment, drawing inspiration from personal experience and the world around her. Armed with a sound that reflects Sheryl Crow’s pop/rock sensibility, Sara Barielles’ vocal prowess, Basia Bulat’spoignant poetry, and Sarah McLachlan’s graceful delivery, GIRL, POLITE provides a solid testament to Jill’s burgeoning musicianship and undeniable spirit.

The other single Jill released on this album which I really like is her title track, “Girl Polite

Jill explains that the song is about “wanting to be a bitch but you’re just too polite.” Sometimes I wish I could be much tougher or voice a stronger opinion on certain things big or small, but I might be too shy or don’t want confrontation so I don’t say anything. So this song is kind of an anthem on how to be stronger. “