Another story in this week’s DT Halloween series for you…

Matt Blackstone (C’03) is not only a 10th grade English teacher, but he is the author of a new young adult novel, A SCARY SCENE IN A SCARY MOVIE (FSG/Macmillan), which released this summer and Seventeen magazine put it on it’s Summer Beach Read list! Yep, this is another story about a Penn alum who is an educator and an author!

One liner is “It’s about Rene, a male teen with OCD, and his lingo-inventing friend who tutors him in the art of playing it cool.”

After the jump, learn more about the book, Matt’s perseverant path from Penn to becoming an author, and a great website for aspiring authors looking for agents!

Here’s the shpiel about Matt’s book: 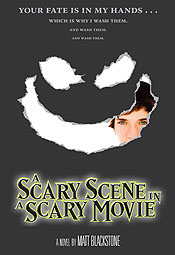 “Rene, an obsessive-compulsive high school student hell-bent on becoming a superhero, smells his hands and wears a Batman cape when he’s nervous, which is six to eight hours per day, depending on whether it’s a weekend or weekday.  On a weekday, he witnesses his English teacher smash his head into the blackboard.  Rene is convinced that he is responsible for this and all other tragedies.  If he picks up a face-down coin, moves a muscle during a time of thirteen (7:42 is bad luck because 7+4+2=13), or washes himself in the wrong order, Rene or someone close to him will get left back in school, break a bone, fall into a coma, contract a deadly virus, and/or die a slow and painful death like someone in a scary scene in scary movie.  Or worse.

Rene’s new and only friend tutors him in the art of playing it cool, but it’s not as easy as he makes it sound.  Can Rene ever be safe—he doesn’t like to talk when not surrounded by security details like locks or walls or people he trusts—when the scariest place is in his head?”

Matt’s story is another alumni story of dedication and perseverance.

What was Matt’s path from Penn to now?
Matt tells me,

“It started with the writing classes at Penn, especially the writers’ workshop classes.  After graduating, I joined Teach for America in Baltimore and quickly began working at a 10th grade English teacher.  After my two years were up, I moved to New York City to continue teaching and get back into writing.  (Teaching may be an underpaid profession, but for those interested in writing about or for teens, it’s a great opportunity to observe how they interact and what interests them most.)

The first draft of my book took six weeks.  I couldn’t write fast enough.  I started it a few days before a family vacation to Mexico.  I wrote on the plane, on the local buses, at the hotel, at the pool, on my bed, on the plane ride home, and I couldn’t stop until I was done.

And then I learned that editing looks much different than that, and takes much longer.”

How did Matt get published?

“I wrote a one-page pitch, listing everything great about the book and everything splendid about me, and looked for representation.  I wish I could say I queried one agent and a day later I was golden.  But that’s not the case.

You see, as a NYC public school teacher, I have a week off in February to celebrate the birthday of our forefathers.  And in Februrary, 2009, I spend that week at my computer. Occasionally I ate a meal, but for the most part, I queried agents.

Well, about 80% of them.  And definitely every single one who at some point their life expressed even the slightest bit of interest in Young Adult literature.  If they did an interview and mentioned the word “Harry” or “Potter” . . . I emailed them.  If they liked a move about superheroes   . . . or plain old heroes . . . or the supernatural . . . or super and/or natural things . . . I emailed them too.

AgentQuery.com helps to narrow the madness and the stalker feel, but the point is the persistent emailing.  And the waiting.  Always the waiting.  The endless Great Wait.

Jeff Herman’s Guide to Book Editors, Publishers, and Literary Agents is very helpful, providing a comprehensive list.  But I prefer AgentQuery.com.  It’s quick, you can focus your search by genre; for instance, type in “Young Adult” and it’ll list all the agents accepted Young Adult.  It’ll also tell you what specifically they’re interested in and how best to reach them.  I’ve found emailing to be the best (and most cost efficient) way to reach agents.  You can email dozens in a day and hear some type of response, whereas waiting for the mailman every day can really drag you down.

Once I finally found an agent that seemed normal and helpful and excited about my work, I signed with her.  So began step #2 of the Great Wait: waiting on an editor.”

What books should an aspiring author read?

“On Writing by Stephen King.  Bird by Bird by Anne Lamott.  Both books are funny and empathetic, anecdotal and instructional.”

Finally, Matt tells me about some great events for writer networking:

“The yearly Book Expo is fantastic, but expensive.  There are a number of conferences through SCBWI (Society of Children’s Book Writers and Illustrators) that can also help a great deal. They also help writers form editing groups.” 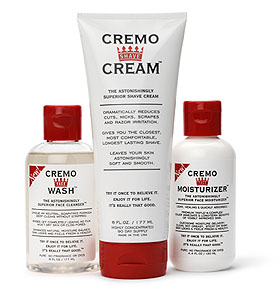 To win the gift basket you see above (plus a fog free shave mirror not in the picture), all you need to do is retweet the following (click link below):
Win this Penn alum’s Cremo Shave Cream, Moisturizer, Wash and Mirror. (Retweet to enter contest!) http://goo.gl/o2jpT #upenn