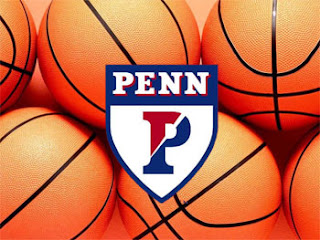 Just because I went to only a few Penn basketball games during college due to my involvement in Mask and Wig, that didn’t mean I wasn’t interested in Penn Basketball.

And just because I don’t necessarily follow any sort of basketball doesn’t mean I’m not interested in Penn basketball.

I do love the spirit when Penn alumni come together and cheer on Penn. And now there’s a whole new season that’s been announced. A season when Penn Basketball will be on national TV several times this season.

Per Pennathletics.com, “Penn will play on the ESPN family of networks four times during the course of the season, highlighted by its national telecast on ESPN2 when North Carolina comes to The Palestra on Tuesday, Dec. 4. In addition, the Quakers’ Big 5 game at Villanova (Dec. 1) will air on ESPN360; their Ivy game at home with Yale (Feb. 16) will air live on ESPN Classic; and their season-ending contest at Princeton (March 11) will be televised on ESPNU.

As part of the Ivy League’s television package with the YES Network, Penn’s contest at Yale (Feb. 29) will air live to a nationwide audience.”

Thanks for the tip from Kiera Reilly C’93!

Check out some past video clips from Penn Basketball!

Check out who was in attendance at the big 2003 Penn vs. USC game (Los Angeles Penn event)!