Home / 1993 / This Penn Alum Directed a Groundbreaking Episode of TV

This Penn Alum Directed a Groundbreaking Episode of TV 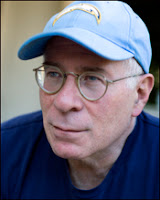 Did you see last week’s episode of “Ugly Betty”?  If you didn’t, it was packed full of Penn! As I was watching the credits, I noted that not only was Penn alum actress Becki Newton (C’00) featured but also Penn alum Andy Wolk (C’70, DP, 34th Street) directed this episode!  …Then just last night Debbie Frank (C’93) emailed in to let me know that actress Jill Abramovitz was featured in the episode as well. I emailed Andy and he gave me some scoop from his time on the set…including the day the show got cancelled and the groundbreaking kissing scene… More about Andy and some inside dish after the jump! Before we get to the “Ugly Betty” episode, you should know that Andy has written for and directed many TV shows.  Notably, he has directed 4 episodes of the ABC family show “Lincoln Heights” and twice was nominated for the DGA Award (“Time to Let Go” and “The Feeling That We Have“) and once for the Best Cable Director (“Glass House“). Further, Andy has always been very involved with Penn over the years.  For the past 3 years he has been teaching Advanced Screenwriting at Penn through the English Department and the Kelly Writers House.  (Also, years ago, Andy taught a writing workshop to Penn alumni here in LA) Now, back to the “Ugly Betty” episode Andy directed.  Andy shared some interesting scoop from the set:

“The show was given its final cancellation while we were in prep and yet the spirit on the set was remarkably upbeat. People loved doing the show and just wanted to give it their all. It was quite moving.”

For those who didn’t see the episode, it was a groundbreaking one in which one of the lead teenage boy characters kisses another boy in his drama class (see video clip below). Andy tells us what it was like to direct this scene:

“It was a tricky and tough scene because I don’t believe a scene like this was ever done on television before. So consequently we rehearsed it quite a bit well before we shot it and yet in all the rehearsals I never had the two boys kiss.  Everything leading up to it, but no kiss. So the first time they kissed was actually when the cameras were rolling and I think that gave it a freshness and reality.”

…As mentioned earlier in this post, fellow Penn alum Jill Abramovitz was featured with 1-2 lines in the theater scene towards the end of the show.  (She is the one looking up at Betty in the screengrab below) 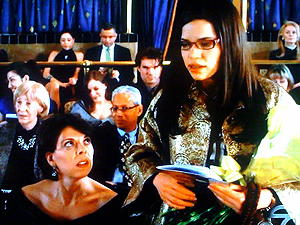