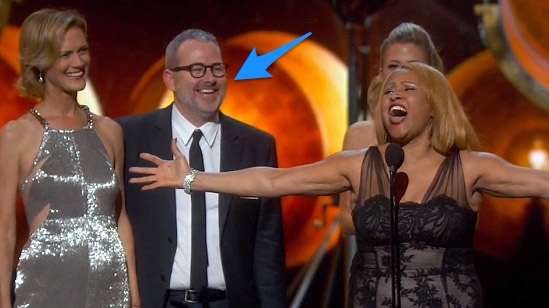 Outside of John Travolta butchering Idina Menzel’s name, you may recall that another memorable moment from last night’s Oscars was a song performed in the acceptance speech for Twenty Feet from Stardom as “Best Documentary”.

Turns out that Penn alum Morgan Neville (C’89, Daily Pennsylvanian) directed and produced the film!  The film examines the lives and experiences of backup singers in the music industry.  And according to his IMDB page, it  looks like Morgan’s been making quite a number of music documentaries for a while now.

…And do you know that this isn’t the first time Penn alumni films have been nominated for Oscars?

2) In 2006, the short film Our Time is Up, directed by Rob Pearlstein (C’95), produced by Loren Mendell (C’95), and contributions by medical consultant Dr. Cara Rubinstein Gardenswartz (C’96) got a nom.  You can watch the film below:

3) In 2000, Colin Campbell’s (C’91, President of Intuitons, Without A Net, Penn in Pictures 2001 panelist) short film Seraglio was nominated for an Oscar. Check it out below: