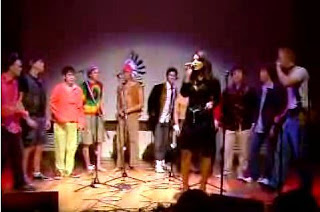 A few weeks ago, Parisa from last season’s The Real World: Sydney came to Penn to sing with the Pennchants.

…If you were a fan of The Real World, you would know that Parisa is a good singer (and unfortunately had to deal with some immature roommates from her season)

So how did the Pennchants score this?

Apparently Parisa is a family friend of the group’s President Adam El Sehamy (C’09) and she came down to Penn where the group arranged one of her songs. Pretty cool!

Watch Parisa performing with the Pennchants

Check out a clip of Parisa from The Real World: Sydney

Check out our 900+ Penn videos