Since the beginning of DT, I’ve been covering all sorts of stories about Penn alumni musicians, filmmakers, actors, plus dozens more entertainment professions.

Then, over the past couple of years on DT, I’ve been covering stories about new young alumni trying to break into careers such as acting, more acting, and music.

Now, this summer, we’re going to be following two current undergrads who are out in LA exploring the world of entertainment. 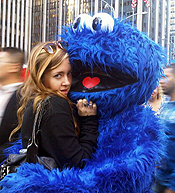 To start things off, let me introduce to you LA native, Ali Kriegsman (C’13, Off the Beat). This summer Ali is working as an assistant for a clothing boutique, as an intern for a lifestyle and fashion magazine, as a hostess in an LA restaurant …and as a blogger for DT!

While she is in LA, Ali blogs about her quasi self-deprecating, slightly offensive take on LA, “its desperate residents and the ridiculousness that ensues”.   I’m bringing Ali to my DT readers because I think she has a fresh, fun young take on LA that I think many LA “new” residents have, but over time become immune to : )

After the jump, find out more about Ali, which resources she used to get her magazine internship and then read which celebrities Ali has seen, sort of met, and makes fun (!) of while she has been here in LA.

Before we dive into one of Ali’s posts, two things you should know about Ali:

1) She is a great Off the Beat performer:

(Let’s not forget these Penn alumni who covered Lady Gaga as well!)

2) Ali shared with me how she got her magazine internship (something which may be helpful to other undergrads looking to pursue a similar path):

“I got the magazine internship by perusing online for internships with publications in LA. I applied and had an intense interview over the phone.”  Ali is currently fact checking written stories and pitching/writing articles for the Calendar section.  Soon she will also be sent to cover stories and events.

Now, check out Ali’s tales of her LA celebrity encounters and unapologetic observations as a restaurant hostess:

“…So I work in a trendy, celeb-buzzing restaurant in WeHo (for all you not familiar with abbreviation for West Hollywood, there you have it). Up until the other night, the most famous of famous people I personally had seen was the Fred Armisen

, the racially-vague man who plays Barack Obama on SNL. He also plays Joy Behar, for those of you who miss the Obama intros because you’re too busy tending to your late-night frozen corn fix (because I KNOW I can’t be the only one).

1) Anyway, the other night after the MTV Blah Blah awards, Leighton Meester

(who are you, though?) and some third famous but irrelevant mushy girl came into the restaurant and sat – OF ALL PLACES – in the nook directly in front of my hostess square! Who’d a thunk it?! They were dramatically escorted by their sleazy 30-something agent on the verge of some IN-TENSE balding, and continued the drama for the next 3 hours. Yes, 3 hours. What do I mean by drama, you ask? Here is a little taste—

AGENT: (at the top of his lungs as though caught on fire): I AM SO GLAD TO BE HERE. SO HUNGRY, YO!
AJ: (hair invoking a coiffed poodle on ‘roids) : I KNOW I KNOW I KNOW I KNOWWW! RYTEE?!? FASHO!!! OMGAWD DRINKZ YA’LL!
IRRELEVANT MUSHY GIRL: Yah like, thanks for having me I mean..today went really well I just feel like…this is really my big break and you know I just…
LEIGHTON’s EYES: excuse me? why the fuck are you here?
LEIGHTON’s MOUTH: [insert obnoxious, roaring laugh fat enough to rival Jennifer Hudson pre-Weight Watchers)
AGENT: Ya’ll are my GIRLZ!
LEIGHTON’s MOUTH: [insert ANOTHER obnoxious, roaring laugh)

2) Okay okay that’s how it went on and on.  Justin Long

showed up (of dating Drew-Barrymore-fame, of Accepted

, of other movies where he plays an awkward looking guy…because he is one) (so sad, so sad). He paid for them all.  But not the poodle.

came to the restaurant with a large group of self-loving hipsters. one had red hair and bangs (so countercultureeee), and a few had afros? Jew fros? Christian puffers? (I was sick of using “fros”)

ALI: “Hi um..are you Sarah Bareilles? Or do you just look like you would be Sarah Bareilles?”
(My mind, anxiously awaiting the answer to my not-whatsoever-eloquent question)
SARAH: “Yah, no.”
(My mind: WTF does Yah, no mean? So is she? Isnt she? Is this awkward? Should I leave?)
ALI: “Yeah no…like you aren’t? Sorry, I don’t even really know why I would know what she looks like hahaha shes not like SUPER SUPER famous in that obnoxious in-your-face-way so like..”
Ali, interrupted by SARAH: “No I am her…”
(I shit a lil in embarassment)…then…
ALI (as though 11, and at a Star Warsconvention):“OMG Im in an a cappella group we cover all your songs! Like my friend Jung did, my friend Hannah..omg we love love love you, you are so talented and powerful.”
THEN I GOT PET. i got COMPASSIONATELY (and probably sympathetically) rubbed by Ms. Bareilles. On my arm/shoulder area (for those who want specifics) at about 9:39PM.
She sat. she ate. I replayed it a few times.
Then I got over it…