Home / This Spoken Word Artist is not going to Africa for Safari or Volunteering; “he’s just going” (VIDEO)

This Spoken Word Artist is not going to Africa for Safari or Volunteering; “he’s just going” (VIDEO) 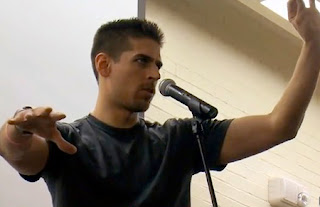 Over the past few years I have been amazed at the Penn alumni and undergrad talent that has come out of this new genre of entertainment called “spoken word“.

Before there was Alysia, Aysha, Josh and Caroline, there was Carlos.

And if you recall, Carlos Andrés Gómez (C’04) was my #2 pick of my then top 5 Penn videos that will “give you the chills”.

After the jump, watch a great new passionate video from Carlos that you’ll all get a good chuckle from…and find out how he had gotten cast in a big Hollywood movie!

In the video above, Carlos questions “why people go to Africa”. He does bring up some humorous truths. Although I’m not sure if THESE Penn alumni are going to laugh so much at his video…  : )

To get more of a backstory on Carlos, check out this video below from a Japanese TV show which profiled him. In the video, Carlos chronicles his unlikely rise to fame, from inner-city social worker and public school teacher to burgeoning film/theater actor and world-renown poet.  And find out how he got a role in the Denzel Washington film Inside Man

.  (let’s not forget that Denzel is now a proud Penn parent!)

Carlos is currently touring with world with his spoken word art.  Learn more about what he’s up to on his website HERE