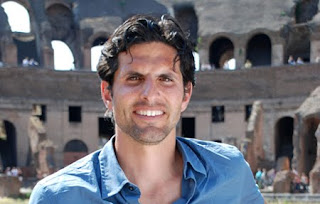 With a fullbright scholarship and an American Academy in Rome fellowship under his belt, it’s no wonder why Penn alum Darius A. Arya (C’93, DKE, Water Polo, Classics) is once again featured in a National Geographic show airing all this week called “Rome Unwrapped”.

More from Darius and a video clip from the show after the jump!

The show is a spectacular extravaganza on the Roman world, with particular insights gained from new excavations and explorations, with top scholars from the Anglo-American world.  CGI is state of the art and access to sites is extraordinary.

In the show, Darius is one of the lead figures throughout the show and dishes on “Rome the superpower”, “the death of Caesar”, the “Colosseum/Secrets of the gladiators”, plus more!  Check out the clip below.  Darius appears in minute 1:29.

I’ve watched a bunch of clips online and there are some really interesting and dramatic insights you probably never knew about ancient Rome.

I chatted with Darius and he tells me this has been “just about the best job one could have, truth be told!” (sounds similar to THIS Penn alum professional who also consults for TV too). Aside from this, Darius has a day job which includes excavations, teaching (architecture, religion, classics, topography) and participating in other Rome related shoots.

More about the show HERE