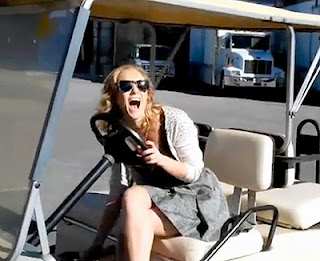 Last month we introduced you to Jess Garvey (C’09), DT’s “Starter Reality Star” and watched her go on an actual audition for a Special K commercial.

Today, Jess brings us her next installment and you’re going to see her be quite the busy actress filled with a week of auditions and meetings..

After the jump, watch Jess’ video and find out about:

To supplement the video above, Jess gave us more details:

“I auditioned for the lead in a an indie film and got great feedback from the casting director but unfortunately I was not the right look. The part was a tattooed rocker stylist who works for a big musician. I would say I am more of a flowers on my baby doll dress sort of girl but it was still a great experience. All the directors and producers were in the room which is pretty rare for a first audition. I actually loved it because I got to practice going into a high stakes environment. It can be intimidating to walk into a room of ten people sitting at a long table and judging you. Haaa to tell you the truth I like it better when there are more people in the room because it makes the process feel more real when I have an audience. When it is the casting director, a camera and myself it can feel laid back and an audience makes it more fun!”

on the new play she’ll be starring in and her southern accent:

“Later in the month, I got a role in a new play that will be going up at the Actors Studio in the New Year. We had a table read and the writer is now making some adjustments to the script. I am one of the leads and the role is really perfect for me. I have a southern accent and am a young woman who is sooo naive but I think I am really worldly and mature. Its a really funny character and I get to work on my southern accent! The play is about a middle aged man who is about to commit suicide and his ex-girlfriends and wives all come to save him and make a party out of it because none of them are taking him seriously. Yess it is an ironic comedy.”

on shooting films for Sundance: she wants to party!:

“Last week I shot two bumps for Sundance with Penn film producer Jake Avnet (C’05) and a bunch of Penn alum actors including Alex Weber (C’09), Perry Jackson (C’05), DJ Lubel (C’05) and Jason Ziven (C’05)! A bump is a short comedic film that plays before the movies at Sundance. This year the director and producers made four of them and incorporated the marketing campaign in each one. I played a Hollywood actress who goes to Sundance with her friends and all we want to do is go to the parties and be in the festival scene. Haha of course! I also stayed and shot a second one where I played a 70’s mom! It was sooo much fun and I met so many great people whom I hope to work with again in the future!”

on her table reads for a new TV show:

“I got invited to help out at a table read for a new show called “Franklin and Bash”, which is a courtroom comedy. I know the casting director for the show and had auditioned two months ago for a role but it didn’t work out. I am on their radar and they know that I am a good actress so they invited me to help. It was a good opportunity to get my face in front of the directors and producers and sometimes if they have a role that needs to be filled and you do a good job they will offer it to you after the read. They also asked me back for a second day after the first table read which was great. Unfortunately, there were no roles in either episode I read for that really fit. I read for the big guest stars, which was awesome because I had a lot of lines but the roles were for women in their thirties and I don’t look that old. After the two days, I had an agent that I work with at CAA call the producers and writers to put in a good word for me soooo hopefully there will be an opportunity somewhere down the line! Actors on the show included Malcolm McDowell

and Garcelle Beauvais. I grew up watching these actors and when I heard their voices as we were reading through the script I could not believe that I was acting along side them. Such a cool experience and really reminded me how awesome the business can be!”

on her game show audition experience:

“That was a weird experience. The casting director had everyone stay in the same room and observed us as we played a mock game of “Million Dollar Drop”, which is a new game show. It is a general knowledge, multiple choice show in which the contestants are given a million dollars and their job is to hold onto it!  The casting director asked each pair a little about themselves, such as what each person does for a living, how the contestants know each other and blahh blahh blah. The casting director did not like my partner and I for the show because we haven’t known each other long enough. Ohhh welll!

on the advice she got from a fellow Penn alum:

“I met with a creative director at (Penn alum) Marc Platt productions and we discussed my career and he is going to introduce me to his friend who can help with casting opportunities! It was great to meet him and hopefully he will think of me for future projects. It is all about getting yourself in front of people and making a good impression. That is how I got the Sundance spot! After the meeting, I galavanted around the Universal lot and tried to rent a golf cart because every famous actress needs to drive around the lot in a gold cart..obvi! Well… the manager on site did not like that idea at all. Apparently, you need to be on their million dollar insurance plan. Next time!”